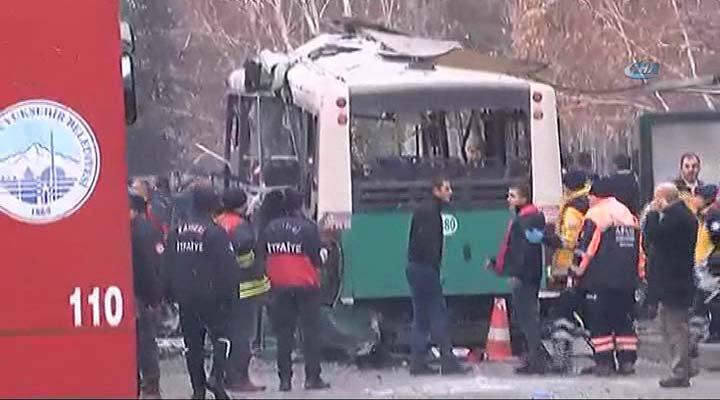 Thirteen Turkish soldiers were killed and dozens more wounded in a car bombing targeting off-duty conscripts being taken by bus on a weekend shopping trip, the latest in a string of attacks to rock Turkey in recent months.

Forty-eight soldiers were wounded in Saturday’s attack in the central Anatolian city of Kayseri, the army said in a statement, adding that there could also be civilian casualties.

Television pictures showed that the bus had been reduced to a smoldering wreck by the impact of the blast, as wounded were taken to waiting ambulances.

The explosion comes a week after 44 people were killed on December 10 in a double bombing in Istanbul after a football match. The attack was claimed by Kurdish militants.

Deputy Prime Minister Veysi Kaynak said in televised comments that the attack in Kayseri was “unfortunately similar” to last weekend’s strikes in Istanbul.

The army said that the bus — carrying low-ranking privates and non-commissioned officers — was attacked after leaving the commando headquarters in the city.

The bus was owned by the municipal transport authorities in Kayseri but was transporting the soldiers who had taken permission to go to a local market for the day, the Dogan news agency said.

President Recep Tayyip Erdogan has been informed of the attack by the chief of staff General Hulusi Akar, Anadolu added.

Interior Minister Suleyman Soylu was on his way to the city, it said.

Turkey has seen a spate of deadly bombings in 2016 blamed both in Takfiri insurgents and Kurdish militants that have left dozens dead.

One of the main cities of central Turkey, Kayseri is a key industrial hub that is usually seen as a peaceful area.

It is well west of the southeast of the country that has been hit by months of deadly fighting between Kurdish militants and the security forces.